Home  /  Sharia Law in US  /  Opinion: History, fasting and the festive spirit of Ramadan

Opinion: History, fasting and the festive spirit of Ramadan 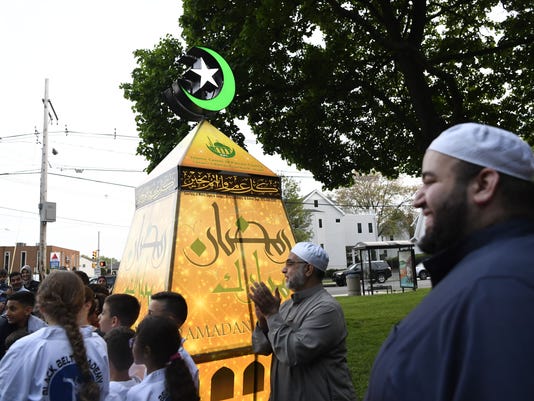 Tuesday is Day 28 in the month of Ramadan, the ninth month of the Islamic calendar.  Revealed to the Prophet Mohammed during Ramadan, Muslims believe the Quran is a mercy to humanity containing a guide to a righteous ethical life. “O believers, the fast is ordained upon you, as it was ordained upon those who came before you -perhaps you will fear God,” the Quran announced.

Fasting as a spiritual journey to cleanse the soul toward contentment and peace of mind is a common ritual in most religious traditions. Jews observe a full day fast on Yom Kippur. In addition to Ash Wednesday and Good Friday, Christians fast 40 days during Lent.

“[E]at and drink until the white streak of dawn can be distinguished from the black streak. Then complete your fast until night time,” God directed the believers. Muslims around the world refrain from food, drink (including water) and sexual relation from sunrise until sunset for the entire 30 days of Ramadan.

Because of the lunar Islamic calendar, Ramadan every year is 10 days earlier. This Ramadan sunset in New Jersey is around 8:20 pm. It is a very long fasting day but Muslims wake up shortly before sunrise to have Suhoor, a meal before starting the full day fast.

Fasting is not only from food and drink. You fast by refraining from gossip, anger and envy. You fast to seek forgiveness and to avoid committing sin. Fasting without purifying the soul of sin, Muslim scholars explained, would be spiritually useless and actually harmful. Fasting makes you relate to the poor and hungry, encourages spiritual focus, self-discipline and performing penance. This is God’s “clear signs to mankind perhaps they will grow pious.”

Muslims in America have been fasting since our founding. Islam is an indigenous American religion with deep roots. Estevancio or Esteban the Moor, a North African Muslim, arrived with the Panfilo de Narvaez expedition in 1527. William Brandon in The Rise and Fall of North American Indians considers Estevanico the discoverer of New Mexico.

A large percentage of African slaves brought to America were Muslim. Like Abdul-Rahman Ibn Ibrahima Sori, a West African Muslim Prince, enslaved in Mississippi in 1788.  Fluent in Arabic, Abdul-Rahman sent a letter to his family in Africa that ended up with the Sultan of Morocco. After the Sultan requested his release, President John Quincy Adams freed Abdul-Rahman in 1836 — after 40 years in slavery. Abdul Rahman’s story was the subject of the PBS documentary: “The Prince Among Slaves.”

The most prominent early Anglo-American convert to Islam was Alexander Russell Webb. Converting to Islam in 1888, Webb changed his name to Muhammad Webb. He was a writer, publisher and the United States Consul to the Philippines. He published “Rutherford Times” in Rutherford, New Jersey. In 1893, he represented Islam at the first Parliament of the World’s Religions. Webb died in 1916 and was buried in Hillside Cemetery in Lyndhurst.

Michael Nash’s “Islam Among Urban Blacks: Muslims in Newark New Jersey” is a Newark history treasure trove. While Webb had established a Study Circle in Newark in the 1890s, Islam arrived to Newark in the early 1900s with North Carolinian Timothy Drew. Later changing his name to Noble Drew Ali, he established in 1913 the first documented Moorish American community in America, a community actively reclaiming its African Muslim heritage that was erased by the vicious institution of slavery. In the 1940s, the Moors wore their Fezs in Newark and Montclair without being harassed. Notably, Hesham Jaaber of Jehadi Institute in Newark performed the funeral prayer for Malcolm X.

Muslim immigration to America picked up after World War I. Estimated to be 3.5 to 8 million nationally, close to 400,000 Muslims live in New Jersey. There are more than 2000 mosques in America. Muhammad Webb had a short-lived mosque in Manhattan in 1890s. The oldest still existing mosque in America is the Mother Mosque in Cedar Rapids, Iowa, constructed in 1934 by Arab Muslim immigrants from Syria, Lebanon, Palestine and Jordan.

Ramadan is a month to increase charitable giving. It is also a festive month, Muslims gather every night for Iftar — break the fast and perform a Ramadan prayer every night called Taraweeh. Many Muslims spend the last ten nights of Ramadan immersed in all night worship known as ‘Itikaf. Ramadan concludes with a three-day celebration called Eid al Fitr, which this year will be on June 15.

Take a ride down Main Street in Paterson around 8 p.m. and you will see the festive lights, the hustle and bustle of Ramadan shopping every day and families breaking fast at local restaurants. During Ramadan many Middle Eastern restaurants have delicious Ramadan buffets and make special holiday sweats. Experience Ramadan by going to grab an Iftar dinner in Paterson. Ramadan Kareem New Jersey!

Assad Akhter, director of community outreach at St. Joseph’s Regional Medical Center, explains the importance of holding events such as an interfaith Iftar to bring the community together to break fast during Ramadan. Danielle Parhizkaran/Northjersey.com